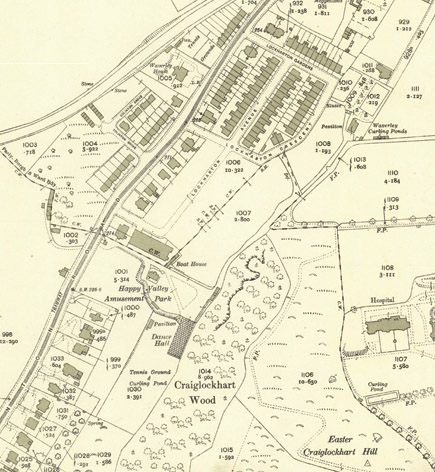 Happy Valley was carved out by glacial action beneath the volcanic cliffs of the Craiglockhart Hills. The Megget Burn once ran down the valley and the pond is still fed by natural springs. For more than 200 years, the people of Edinburgh have come here to exercise and relax.

The men who shaped the valley…

In 1773, Alexander Monro, Professor of Anatomy at Edinburgh University, purchased a 271 acre estate which included this valley and most of what is now Craiglockhart. He was the middle Monro (hence Monro Secundus) in a dynasty of three Alexander Monros who, between them, held the Chair of Anatomy for 126 years. Their pioneering approaches to anatomy helped to establish Edinburgh as a centre of medical excellence. Monro Secundus was a passionate gardener who planted thousands of native trees across the estate. On the death of his son, Monro Tertius, in 1859, the land passed into public ownership.

The poets who found inspiration here…

The Craiglockhart Hydropathic (now a campus of Edinburgh Napier University) opened in 1880 to exploit the natural springs at the head of the valley. In 1916, the Hydropathic was commandeered as a convalescent hospital for officers suffering from shell shock. The officers were encouraged to use the valley for exercise and a model-boat club met at the pond. Among the patients who passed through Craiglockhart Hospital were the poets, Siegfried Sassoon and Wilfred Owen. Sassoon nicknamed the hospital ‘Dottyville’ but both he and Owen benefitted from the progressive therapies of the medical officers.

After Haymarket Ice Rink opened in 1912, outdoor skating and curling declined in popularity. Boating remained popular. An inventory in 1925 recorded 28 rowing boats and two canoes for hire on the pond. The area became known as Happy Valley. An amusement park was built with icecream stalls and tearooms and swings and roundabouts. A good day out could be had by the whole family. In the 1930’s, a Dance Hall opened where the Charleston and the Jitterbug were danced to the jazz and swing rhythms of the latest bands. This was the heyday of Happy Valley. This was where people came to find excitement and romance and, indeed, happiness.

The tennis greats who battled on Centre Court…

Happy Valley played an important but highly secret role in the Second World War. Buildings were requisitioned, reservoir ponds were created and the site was used for testing marine engines. The Amusement Park never reopened after the War. Tennis became the most popular sport in Happy Valley. The opportunity to play on grass courts made the Scottish Championships a popular warm-up tournament before Wimbledon. The greatest players of their generation – Fred Perry, Doris Hart, Rod Laver, Lew Hoad, Martina Navratilova, and Ivan Lendl – battled it out on Edinburgh’s own Centre Court either in the Championships or in exhibition matches. A famously ill-tempered clash between Jimmy Connors and John McEnroe in 1989 was watched by nearly 5000 spectators. Narrowly avoiding disqualification, McEnroe won in five sets. In 1959, Edinburgh Council took over the Tennis Centre and carried out a major redesign in the 1990’s. In 1998, a ten year old Andy Murray was undefeated as Scotland’s Under 12’s trounced England here in Craiglockhart at Happy Valley.

All images on this page are protected by Copyright.

Do NOT follow this link or you will be banned from the site!